HOW THE PROJECT STARTED

The beginning of the Borda Sabaté winery dates back to 1944, when Joan Canturri, (also referred to as “el padrí”), great-grandfather of Joan Albert Farré, bought the land next to the right bank of the Valira river. The site is located right by the CG-1 highway that connects with Spain, not too far from the now extinct Punt de Trobada.
The cows at Borda Sabaté have always been a symbol of the property. Tobacco was grown deep down in the depths of the valley, an industry that back then used to provide for the family.

However, it was thanks to Joan Albert’s father, Jordi, and his wine and beverages distributing business, that Joan Albert was drawn into the world of wines. During that time, he discovered the greatness of the Riesling varietal, as well as the distinguished wines of the French Grans Chateaux.
As a result, Joan Albert started dreaming of making his own wines in Andorra. The idea of growing high altitude vineyards in Andorra had been in the back of his mind for as long as he could remember, even during the time he studied abroad.
For a long time, he had been studying the high terraces of the Muxella plots and its sun exposure, but there was plenty of room for improvement at the estate in order to plant vineyards. It wasn’t until some time later when, thanks to his father’s support, work began on the property and they could overcome minor setbacks .
The stars had aligned: the land turned out to be perfect for growing vineyards regarding sun exposure, orientation and ventilation. By the time refurbishing was completed, his father asked him what he wanted to plant and he didn’t hesitate: vineyards!
In 2005, Joan Albert Farré and his father planted 5,000 grapevines in the Muxella terraces of Borda Sabaté, at 1,190 meters above sea level, harvesting their first vintage in 2009. Thus, the Borda Sabaté wines were conceived with the Escol 2009, their first wine to hit the market.
Unfortunately, Joan Albert’s father passed away before the first vintage and didn’t have the chance to taste their signature wine. Since then, Joan Albert moved forward with the support of his loving mother Maria Mercè, who encouraged him to pull through.
The harvest has always been a reason to gather and celebrate amongst friends and family.

PLANTING OF THE FIRST VINEYARDS

Joan Albert Farré and his father Jordi, planted 5,000 vineyards after doing significant work on the land of the Muxella of Borda Sabaté, at 1,190 meters above sea level.
2009

The Farré family bottles their first wine and consequently Escol was created, the first high altitude wine of Borda Sabaté. Ecocert, the international certification for organic wines and agriculture is awarded in Andorra for the first time.
2014

FIRST INTERNATIONAL AWARD OF THE WINERY

Borda Sabaté is presented with the first international recognition for the Escol 2011, in London’s International Wine Challenge.
2019

RECIPIENT OF THE TOP TIER IN THE INTERNATIONAL COMPETITION

In the summer of 2020, the Fourty Four concept gets launched. A young and casual proposal, Fourty Four is a set of food trucks featuring the Borda Sabaté wines paired with delicious hamburgers.

Our vineyards are located in a rustic and romantic setting at the south of the Principality, on the slopes of the Solà of the Muxella, scattered across small terraces facing southeast, at 1,190 meters above sea level.

This unique, nature surrounded location enjoys a privileged orientation facing southeast, receiving the first morning sun rays in the entire valley and the breeze coming from the heights of Casamanya de Ordino. Arriving at the vineyards is breathtaking: an all-terrain car ride climbing 300 meters in altitude over the distance of one kilometer is quite the adventure!

The Borda Sabaté vineyards spread out across 12 terraces. Labor in the field is done by hand, with the help of minor cutting-edge machinery. The use of organic products is paramount and the grape variety has been meticulously chosen for its perfect adaptation to cold climates, to ensure a great quality wine. The grape variety planted in Borda Sabaté is:

Is the base for the production of our Escol wine. This white variety of german heritage, provides aromatic qualities and abundant nuances, presenting a natural acidity and unparalleled and characteristic freshness.

This swiss born variety (indigenous of the Aosta Valley), is very well adapted to our high-altitude, yet mediterranean mountain terraces. Is the base for our Torb wine. Its aroma will instantly engage you.

Two majestic varieties known worldwide which, according to the weather, be it warm or cold, can produce high quality, greatly distinctive wines.

Pinot Noir is one of the grand grape varieties, highly appreciated in the world thanks to its uniqueness. The wines produced out of this variety feature a remarkable delicacy. Its fruity and acidic qualities provide great balance.

At Borda Sabaté Cellar we’re constantly in the pursuit of excellence, that is why we keep making tests and experimenting with other varieties, to discover which one will adapt best to our soil and weather and its resulting wine.

Our main priority is the respect for the environment and our soil, and proof of that is the Ecocert stamp of approval, bestowed to us since the very beginning. We are proud to say that we’re the only organic wine producers in Andorra, as we continue to execute organic farming with hints of biodynamic agriculture.

Our cellar is located at 1,100 meters above sea level. It was designed as a double leveled plot to take advantage of the natural slope and to have the lowest possible impact in the vinification processes.
It’s equipped with state-of-the-art technology and machinery. Our oval shaped deposits manage to deliver a certain charisma to the wine that, with the risk of sounding a bit supernatural, they perform magic in our wines. (You can see it for yourself in the picture).
Construction of the winery was completed in 2010 and since then, we love to have visitors over so they get to know the history of our project and to offer tastings of our high altitude wines. If you would like to schedule a visit, click here.

THE AUTHOR OF BORDA SABATÉ

“Wine and land lover, lawyer and businessman, committed to Andorra and its values.”

Joan Albert Farré Santuré is the heart and soul at Borda Sabaté, taking care of management and coordination of this fascinating wine making project. He’s also responsible for making sure that the whole process is made following the maximum respect towards the ecosystem and its biodiversity.
He works with passion and idealism to vindicate ancient vine-growing values in the Principality of Andorra as a traditional culture, to ensure his wines carry the identity of his loving homeland.

“Wine and land lover, lawyer and businessman, committed to Andorra and its values.”

THE AUTHOR OF BORDA SABATÉ

Joan Albert Farré Santuré is the heart and soul at Borda Sabaté, taking care of management and coordination of this fascinating wine making project. He’s also responsible for making sure that the whole process is made following the maximum respect towards the ecosystem and its biodiversity.
He works with passion and idealism to vindicate ancient vine-growing values in the Principality of Andorra as a traditional culture, to ensure his wines carry the identity of his loving homeland. 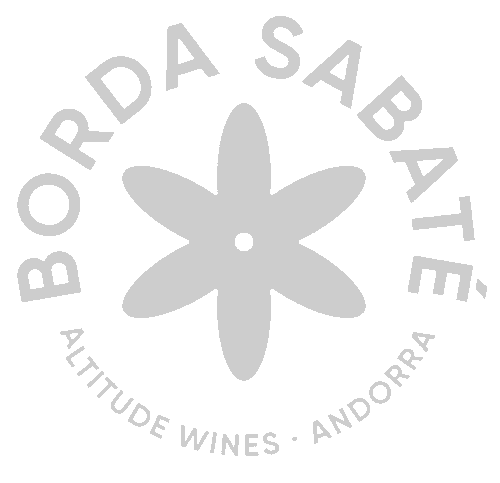